How does Geocell Technology Help us in Soil Stabilization?

How does Geocell Technology Help us in Soil Stabilization?

Home / How does Geocell Technology Help us in Soil Stabilization?

25 Sep How does Geocell Technology Help us in Soil Stabilization?

Posted at 19:43h in Uncategorized by Richago Tech 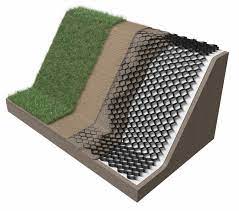 Soil stabilization entails any physical, chemical, biological, or blend method of altering a natural soil to meet an engineering purpose. In expanding as well as developed nations, soil stabilization is chosen as the best method to construct entire roads.

Geocell technology is a visionary 3D honeycomb Cellular Confinement System particularly designed for soil stabilization and assists to prevent geohazards(s). Geocells are vastly utilized in civil engineering and infrastructure regions. They are suppressed by high-density polyethylene (HDPE) or polymer structures and aid in enhancing the performance of erosion control treatments and standard manufacturing materials.

The interconnected honeycomb-like network assists in soil stabilization since they are replenished with on-site granular materials that limit soil movement and impart security and harshness.

A Little More About Geocell 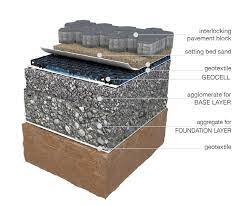 Geocells are a revolutionary method of walling off and detaining soil, aggregate, or other infill components. These three-dimensional cellular structures can be expanded at the time of installation so that they form flexible walls with interconnected strips reinforcing tensile strength while as well preventing movement by holding everything in place via compression increases due to environmental factors like weathering.

When pressure is adapted to the soil enclosed inside a geocell, just as in a load support application, lateral strains are made on the perimeter cell walls. The 3D zone of confinement curtails soil particle lateral mobility, but vertical loading on the confined infill results in appreciable lateral stress and resistance at the cell-soil interface.
Geocells are used in construction to entail erosion, stabilize soil, protect channels, and provide structure for brace load support and earth retention.

Geocells were initially developed in the early 1990s as a way to enhance the stability of roads and bridges. They quickly gained popularity for their capability to stabilize soils and curb erosion on steep grounds. Today, geocells are purposed in a variety of applications, containing road construction, landfills, mining operations, and green infrastructure projects.

The Perks of Geocells

Infrastructure development contains the design and construction of structures while making sure that they do not have a detrimental influence on natural resources. Soil stabilization and reinforcement are a principal source of worry and a possible threat to the long-term cohesion of roads, bridges, and pathways.

Engineers benefit from cellular confinement systems in a variety of methods, including lower cost, enhanced weight-bearing capacity, and boost stability.

Additional perks of using geocells include:

Geocells are purposed to protect slopes from erosion and assist stabilize the surface. The cells conform to the landscape and make a three-dimensional wall that prevents soil particles from moving laterally. This assists in preventing landslides and keeps the slope firm.

Additionally, geocells reduce the amount of material needed to stabilize a slope, which saves time and as well as money. They can also be installed promptly and easily, without the requirement for heavy equipment.

Geocells are widely utilized in road construction to prevent erosion on steep grounds. In one project, a band of four people was able to install over 11,000 square meters of geo cellular reinforcement in just two days.

Geocells are as well used as protective linings for channels and other hydromechanical structures. The cells form a three-dimensional wall that inhibits soil particles from entering the waterway and reasoning pollution. Additionally, the cells assists reduce the erosion of the channel bed and sides. This extends the life of the structure and assists keep it in working order.

3. Static and dynamic load back on weak subgrade soils

Geocells are as well used to support static and dynamic loads on weak subgrade soils. The cells make a three-dimensional grid that distributes the load over a larger area, which aids in preventing soil failure. Plus, the perforations in the strips let water flow through, which helps retain the soil moist and prevents it from becoming compacted. This expands the stability of the soil and reduces the chances of failure.

Geocells are an effective method to support heavy loads on weak soils. In one project, they were able to back a load of up to 400 kilograms per square meter without causing any damage to the underlying soil.

Geocells can as well as be used to create multi-layered earth-retaining and water-retaining gravity structures. The cells make a three-dimensional grid that helps distribute the load over a larger area, which reduces the chance of failure.

Moreover, the perforations in the strips pass water to flow through, which helps keep the soil moist and avoid it from becoming compacted. This enhances the stability of the soil and lessens the risk of failure.