Posted at 21:47h in Uncategorized by Richago Tech 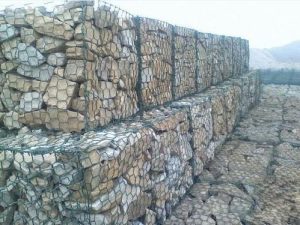 Gabions are strong receptacles filled with inorganic components such as rock, concrete, sand, and soil, as well as glass rock in some architectural applications. Gabions get their name from the Italian word meaning cage. These cages are made of site-specific materials such as galvanized steel, stainless steel, bare steel, PVC coated steel, and copolymer plastic. They’re noted for their versatility, and they’re designed to withstand a variety of weather and site circumstances.

Gabions are a specialized engineering solution made of metal wire and shaped into a mesh. They are wire boxes containing materials such as stones (stone gabion boxes), concrete, or even sand and soil within. The galvanized wires’ endurance determines how long the wire mesh gabion box will last.

Gabions are widely employed in civil engineering, military applications, road construction, general landscaping, foundations, erosion control, and architectural embellishments, among other applications. Gabions are flexible and permeable constructions that are utilized for a number of functions, including architectural fence and veneer building, as well as shoreline erosion stabilization. Landscaping, roads and railroads, sports and recreation, slopes and walls, trash, mining, ports and aviation, structures

Ghana railway line runs through a variety of terrains. The available space was limited in several places, and the side slopes were extremely steep. Due to the difficult terrain and limited building time, various technological breakthroughs were required.

Large amounts of cutting in lateritic and basaltic rocks were required for the track’s construction and widening. The exposed lateritic terrains were subjected to intense rainfall, and the laterite lost all of its cohesion, strength, and became particularly prone to causing heavy slides and slips in the presence of water. Several landslide mitigation techniques, such as the construction of proper retaining walls and rockfall prevention measures, were required to address this issue.

The ballast that is deposited beneath the tracks is primarily used for load dispersion as well as enhanced resiliency. A ballast layer is used beneath the sleepers sloping outwards. This necessitates a more efficient use of space on the sides, with enough width for the embankment. Furthermore, due to the continual use of the track, ballast has a tendency to roll out of tracks over time.

The Gabion Box Wall was designed and built to maintain the site boundary throughout the length of a new development’s access road. Crushed concrete was used to fill the gabions, which were then fronted with stone fill.

An access track is being built along the length of an existing train station using Gabion Box walling. When the present station is dismantled and the new train station is built, the access track will be utilized by a piling rig that will be necessary to lay new foundations. The gabion box wall should always be erected and backfilled on both sides of the railway line. This reduces the risk of the embankment slipping.

Gabion walls are environmentally friendly since they are composed of natural stone that has been little treated. If desired, vegetation can grow on the gabion walls with proper care, allowing them to blend in with the surrounding environment. Furthermore, gabion retaining walls have a lower carbon footprint than ordinary concrete retaining walls of the same size in terms of CO2 emissions. Gabion barriers are well-known for their permeability. They require less drainage and, in some cases, no additional drainage beneath the face of the wall since there is less hydrostatic pressure accumulating.

Gabion offers excellent resistance to air corrosion due to the well-bonded zinc coating on the wire and its ability to support vegetation growth. This property permits the gabion to settle and deform without losing its strength or usefulness. Specifically, when confronted with shaky terrain and flowing water. Gabions are strong enough to endure floods, heavy rains, ice, and soil pressure.