Posted at 19:02h in Uncategorized by Richago Tech 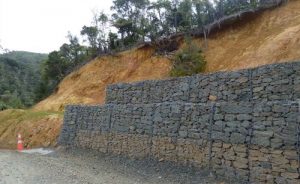 Landslides are the downward movement of rock, soil, or sometimes both along the slopes of hills and mountains. In uninhabited places, they’re just a hazard but become a disaster in inhabited areas. Several landslides occur year after year leading to loss of life and property and damaging the infrastructure and resources. Whether thanks to man-made activities in the name of development, global climate change, or other environmental factors, landslide mitigation is the need of the hour. Activities like excavation, mining, loading, and unloading slopes, and deforestation, are primary activities of man that cause considerable ecological disturbance within the hilly regions. Considering slope failure, erosion, drainage problems, and rising groundwater levels helps find proper solutions. Today, it’s impossible to conceive any geoenvironmental engineering solutions without the utilization of geosynthetics. 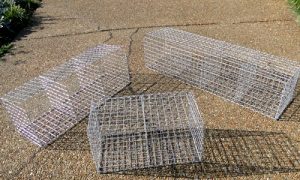 Most often, cloudbursts or even glacier bursts trigger incessant rains that saturate the soil along the slopes and loosen it. The loose soil then gains momentum and gushes down with water and sweeps up everything in its path. Such ecologically sensitive and fragile areas warrant better getting to stabilize the slopes and stop catastrophic landslides. Since the first reason for landslides is an unstable slope, it helps to concentrate on stabilizing it efficiently.

In addition to protecting slopes, gabions are wont to mitigate landslides. In areas where there’s a risk of landslides occurring, gabions are placed on the soil to make a check dam. The dams slow and direct the flow of water, thereby preventing landslides. The soil doesn’t get overly saturated and thus cannot break free by controlling the water flow. The gabions also provide stability to the world around them. They keep the bottom in situ while allowing water to flow freely, keeping the soils where they belong. 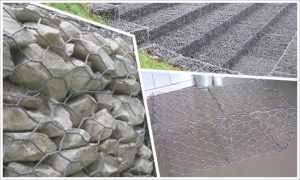 Gabions are used to slow the speed of concentrated runoff or to stabilize slopes with seepage problems and/or non-cohesive soils. Gabions are often used at soil-water interfaces, where the soil conditions, water turbulence, water velocity, and expected vegetative cover are such the soil may erode under the planning flow conditions. Gabions are often used on steeper slopes than riprap and are sometimes the sole feasible option for stabilizing a neighborhood where there’s not enough room to accommodate a “softer”, vegetated solution.

Hexagonal Woven Double Twisted gabion boxes as a wall are a low-cost landslide mitigation solution. Deployed easily and assembled quickly, the gabions aren’t just resilient and versatile but use on-site fill, making the whole process less cumbersome and faster. Additional advantages are permeability, free drainage, and no adverse environmental effects. The Gabion retaining walls act as a mass gravity structure providing stability to slopes against debris falls. The retaining walls provide support to the slopes by resisting lateral movement and pressure. Gabion retaining walls are often as high as 30 feet. Apart from being highly durable and versatile, the lastingness is super advantageous. Do not forget the galvanized coating that creates corrosion and is rust-resistant, ready to withstand extreme climates. Simple transportation and assembly with low installation time and price, and malleability are other elements that make gabions the foremost appropriate wall and slope stabilization structures. Appropriate water channelization and drainage make sure the longevity of the gabion walls, requiring little or no maintenance.