What is Geotextile Sheet?

What is Geotextile Sheet?

Home / What is Geotextile Sheet?

14 Oct What is Geotextile Sheet?

Posted at 13:33h in Uncategorized by Richago Tech 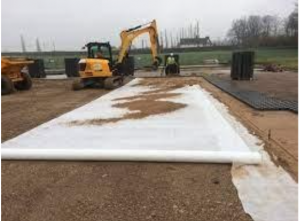 Do you have any idea? Geotextiles are big sheets that bond tightly and conserve our earth dirt on wet days. It is mostly utilised in road building for filtering and separation. It prevents tiny gravels and sand aggregates from migrating. Geotextiles are a type of thin, robust membrane fabric used to strengthen soil and protect it from injury.

Geotextiles are most commonly employed in road building, particularly to fill up gaps between roadways and enhance soil structure. Geotextile improves the use of poor soil and makes construction in challenging areas easier. Geotextiles are excellent materials for construction and infrastructure projects such as roads, buildings, dams, and more.

It improves and stabilises the structure, as well as reducing wind and water erosion. It helps to reduce soil erosion while also allowing water to drain. A geotextile is a fabric consisting of synthetic or natural fibres that is used to hold dirt thin particles together. It increases soil properties such as friction or movement restriction, load support, and bearing failure plane changes.

GEOTEXTILES AND THEIR APPLICATIONS

Geotextiles are porous fabrics made of synthetic materials such as polypropylene, polyester, polyethylene, nylon, polyvinyl chloride, and different blends of these materials.

They come in thicknesses ranging from 10 to 300 mils (1 mil equals 1/1000 inch), widths up to 30 feet, and roll lengths up to 2000 feet. From coarse gravel to fine sand, the permeability of geotextile sheets is equivalent. They are either woven from continuous monofilament fibres or non-woven from continuous fibres that have been thermally or chemically bonded and pressed through rollers into a relatively thin fabric. Even in a harsh soil environment, these materials are sufficiently tough and durable. They can withstand a pH range of 3 to 11.

For many years, the usage of geotextiles in geotechnical engineering has grown in popularity. Geotextiles can be utilised in a variety of applications. They are employed as soil separators, in filtration and drainage, as a reinforcing material to promote earth mass stability, and for erosion management, among other things. The following sections go through some of the applications of geotextiles. 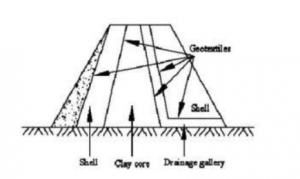 A correctly graded filter minimises seepage pressures from eroding soil in contact with it. The pore pores between the filter particles should be small enough to retain some of the protected components in situ to prevent erodible soils from moving into or through filters. If the filter material is not constructed appropriately, tiny particles from the protected region might enter the pores of the filter material, preventing drainage from working effectively.

As an alternative to filter soil, geotextile can be utilised as a filter material, as shown in Fig-1 for an earth dam.

1) Separation of natural soil subgrade from stone aggregates used as road pavement, etc. is another application for geotextiles as a separator.
2) As a water proofing agent on existing asphalt pavements to avoid fractures. 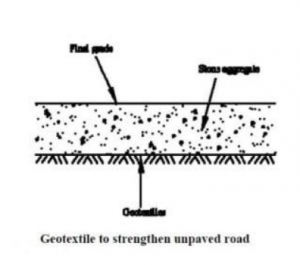 Geotextiles with high tensile strength can help soil that is weak in tension but strong in compression carry more weight. In unpaved roads, geotextiles put between a natural subgrade below and stone aggregates above act as separators as well as increasing the subgrade’s bearing ability to handle larger traffic loads. Geotextiles serve as reinforcers in this case.

Geotextiles can also be used to strengthen fabric-reinforced retaining walls and embankments, which is a common use. This technology is based on the reinforced earth wall technology. Geotextiles have been utilised to create such walls that may serve as both a face and a stabilising feature at the same time.

The procedure for constructing a granular backfill wall. The steps are as follows:
1) Make sure the work surface is level.
2) Drape 1.5 to 2 m of geotextile sheet 1 over a temporary wooden form on the surface with the necessary width.
3) Cover the sheet with granular soil and compress it with a roller of appropriate weight.
4) Fold the geotextile sheet once it has been compacted.
5) Place the second layer on top of the first and repeat the process. The finished wall.
Shotcrete or gunite can be used to defend the front face of the wall. Shotcrete is a sand and cement combination with a low water content, frequently with additives, that is sprayed on to the surface at high pressures, similar to gunite. Geotextile reinforced walls are comparable in essence to reinforced earth walls in terms of design.

FILTRATION AND DRAINAGE WITH GEOTEXTILES

The use of geotextile sheets to reduce erosion of land surfaces has proven to be effective. Erosions of exposed surfaces can occur as a result of falling rainwater or running water in rivers, among other things.
Another minor test also important to double-check the quality before applying the above tests.