What is the thickness of the geomembrane?

What is the thickness of the geomembrane?

Home / What is the thickness of the geomembrane?

25 Nov What is the thickness of the geomembrane?

Posted at 20:36h in Uncategorized by Richago Tech

There are numerous misconceptions regarding what makes an optimally constructed geomembrane in the geomembrane sector. One of the most important is the needed thickness, which frequently leads to a debate among geomembrane specialists and engineers: “Is a thicker membrane genuinely better?”

The chemical and UV resistance of XR geomembranes impresses the XR Geomembrane Engineers, however they frequently request that the geomembranes be 60 mils thick rather than 30 mils, which is too thin for a geomembrane. Because they’re strengthened with an internal reinforcing foundation fabric that gives high strength and puncture resistance, the average XR Geomembrane material used for lining projects is 30 mils thick. Unreinforced geomembranes, such as HDPE, on the other hand, become increasingly puncture resistant as their thickness increases. The distinction is in XR Geomembranes’ unique manufacturing method, which allows them to be thin while yet being incredibly robust.

A thicker geomembrane would seem to have a longer life expectancy. In actuality, a geomembrane’s thickness has minimal bearing on its lifespan. The strength and manufacturing procedure of a geomembrane determine its real lifespan. When it comes to environmental stress, many people believe that a thicker geomembrane is the way to go. The XR-5 Geomembrane, on the other hand, is more puncture resistant and less prone to wear and tear.

When analysing and comparing geomembrane materials, the facts and figures surrounding this thickness disagreement are critical. When displaying the ultimate strength of the XR Geomembrane, however, having actual proof that supports this “less is more” philosophy is far more successful. This is why XR Geomembranes created a puncture pack with three distinct geomembranes: 60 mil HDPE, 45 mil Polypropylene, and 30 mil XR-5.

The puncture pack’s actual demonstration of the XR Geomembrane’s superior tensile and puncture strengths might eventually illustrate that a thicker geomembrane is not necessarily the best choice for your needs when deciding between the three geomembranes.

“Material thickness should be determined by design, which requires site-specific knowledge and considerations. Although various thicknesses, such as 30 and 60, are permitted (Page V), we feel that this method restricts the designer’s options, forces the use of generic designs, and may result in higher total project costs. We also think, and propose to consultants, that a minimum thickness of material type be set first, followed by letting the consultants “create” the system. The following are our suggestions based on seamability, punctureability, and installability: 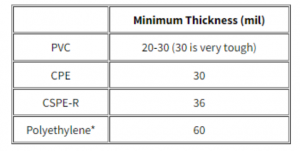 *Polyethylene is specified at a minimum thickness of 60 mil for seamability reasons. It has not been proved to us that PE materials with a thickness of less than 60 mil can be seamed consistently in the field. There is also worry that this is the bottom limit for establishing stress cracking-friendly circumstances. While stress cracking is currently being investigated, seaming techniques are beginning to improve. It’s worth noting that the West Germans now demand PE thicknesses of more than 100 mil.”

The foregoing is transcribed precisely as the EPA gave it to the Corps. The EPA is worried, as you can see from this conversation, that generic designs based only on material thickness specifications might be not only expensive but also harmful in many cases. To guarantee secure confinement, the design engineer must have the freedom to use the most effective material. The requirement of a minimum 60 mil thickness regardless of material does not motivate designers to enhance their work. The EPA is worried about PE seaming below 60 mil thickness (HDPE, VLDPE, LLDPE). PVC, CPE, and CSPE-R, on the other hand, do not have this problem. For example, designs made of 20 or 30 mm PVC can provide extremely effective, secure, and cost-efficient containment solutions.